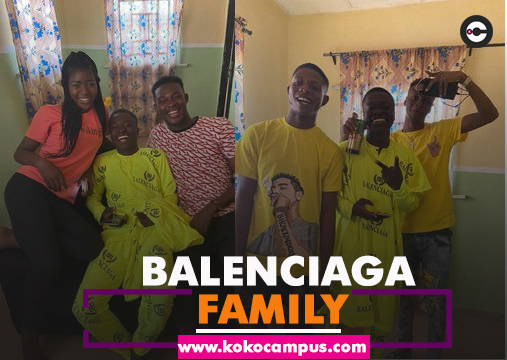 A Nigerian couple recently set the internet abuzz after stepping out in a matching pair of Balenciaga native wear.

Photos and videos of the couple immediately went viral on social media.

Many Nigerians had so much to say especially after finding out that it was a prank by the individuals’.

Social media was recently set abuzz following photos and videos of an Ilorin-based Nigerian couple that surfaced on the internet. The pair stepped out to a shopping mall fully dressed up in what may be described as ‘Balenciaga’ native attires. As expected, the sense of fashion and style of the couple quickly became a topic of discussion in the internet community. Many made hilarious comments about the way some Nigerians go the extra mile in trying to appear fashionable.

However, what was not clear to a lot of social media users is the fact that the man and wife were students of the University of Ilorin, who simply wanted to prank the internet community.

It is evident that the two successfully fooled a lot of people and got the buzz and attention that they were in search of.
Check out the photos of the pranksters below:

Good morning to you all 😍
May your days be filled with love and blessings 😘😘 Balenciaga Family#BALENCIAGA pic.twitter.com/E6CKOXdNGX

2020, all of us for Ilorin are rocking Balenciaga!!! pic.twitter.com/V4YLgTpo2A

Read what other people had to say about them below:

Noticed how nobody talked about the mental health of the Balenciaga couples.

It was just kiki kiki all the way.

2020 couples goal😂
It’s either Balenciaga or nothing 🚶🚶 🚶#BALENCIAGA pic.twitter.com/waRKmfyQiB

In case you missed the viral video, this was how it all started below:

When I thought #LIVMNU Game was boring only to see this Couples rocks #Balenciaga in #ilorin ,kwara state.
This is beautiful with to match fancy bags. Anyone in Lagos to rock this Balenciaga? pic.twitter.com/gxL717IFI3

Is there ever any set of people crazier than students? Imagine, to think it was all a prank. Give it to these guys, they’ve got courage.

When I first saw the whole thing going viral on social media, my heart was doing ‘gbim gbim” with all the twitter monsters going about with their salvages on how my hometown is full of local and fashion insensitive people.

What a glad tiding this news brought. Anybody who knows the official handles of these guys should drop in the comment box. The kokocampus team has a small “package” for them.

Get the best viral stories straight into your inbox!